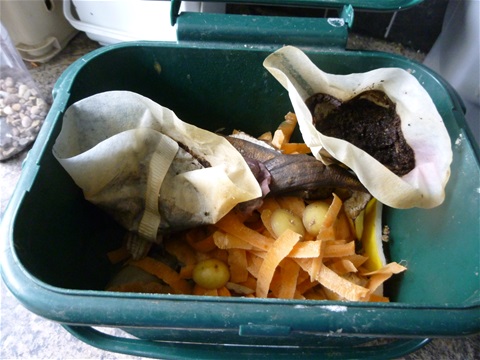 Cofffee & coffee filters with other kitchen waste in kitchen caddy

Typically, spent coffee grounds are dumped into general waste and sent to landfill where they emit methane – a greenhouse gas

In composting terms coffee grounds are a “green”  providing  nitrogen to the  compost with a C:N ratio of about 20:1 very similar to food waste. It is also listed as one of the  Compost Activators

Coffee also provides up to 2% potassium as well as phosphoric acid  and potash. On the negative side,  a search of the internet will show that coffee is acidic and some suggest that it should only be added to acid loving plants but then very few people would make coffee only to pour it on their plants. In fact,  the acid is water soluble, so little remains in the used grounds which tend to have a pH of 6.5 to 6.8

Domestic quantities of used coffee grounds can be added directly to compost bin and to the wormery.  If coffee filters are used there is no need to separate the grounds from the filter both can be added. Some suggest tearing the filter into strips, but this is quite messy if they contain  coffee grounds and I just put the wet filter and grounds straight into the kitchen caddy. White coffee filters are bleached and may have been treated with other chemicals. Organic gardeners may be unhappy to use bleached filters. However, unbleached filters are available.

Many coffee shops will happily give composters used coffee grounds which means that a significant quantity may be added to the bin. To ensure that this does not upset the Green/Brown balance additional browns should be added and  the coffee  grounds should not exceed 20% -25%  by volume of the compost pile. In  America where leaves are used as a source of browns more  than in the UK, where they are turned to leafmould,   a mix of one  third leaves,  a third grass clippings and a third coffee grounds is used. If significant amounts of coffee grounds are being added  they should be mixed well into the organic material

There are commercially compostable single-serve coffee pods  available. But be warned some are only  industrial compostable while others are also suitable for  home composting. Leftover black coffee can be added to the compost bin providing extra moisture as well as coffee but  milky or coffee to which cream has been added should not as the dairy products, even in small amounts,  may attract vermin.

Small amounts of coffee grounds can also be sprinkled  directly onto the soil providing they are then raked over to mix them with the earth or covered with a compost mulch.

Most sources say that coffee grounds can be added to a wormery, even  in a significant quantity, provided they are introduced gradually so that the worms can adjust to them.  Coffee grounds are good at retaining water but will generate heat when first added  and as this should be avoided in a wormery the amount added at any one time should be limited to be on the safe side. Wormeries have been used to compost  coffee grounds but one study has shown that there could be problems if the feedstock were to consist entirely of spent coffee grounds possibly due to the acidity of the coffee and associated harmful organic compounds.  The advice to keep the coffee content below 20-25% by volume  should be followed. Larger volumes of coffee grounds can be pre-composted for three weeks before being added to the vermicomposting bin.

(Evaluation of three composting systems for the management of spent coffee grounds  www.sciencedirect.com/science/article/abs/pii/S0960852411007589)

Coffee grounds and coffee filters, which can be  cut into strips (this is not absolutely necessary but makes the compressed material look tidier)  can be  added to  the Bokashi bin with the usual  food waste daily. Bran is added and the material compressed normally.

Coffee Chaff is the dried husk (skin)  of the coffee bean and is a waste product of the roasting process. This waste product  decomposes quickly when composted.

Chaff is lightweight and tends to blow over the garden  if used as a mulch,  but it mixes well with other organic material in the bin. The nitrogen content is slightly higher than that of coffee grounds. As they have a high nitrogen content,  when making a  layered bin, small amounts  have been layered immediately above a layer of greens such as manure or food waste. Both of which are rich in easily biodegradable nitrogen compound into which the chaff can be incorporated, followed by a layer of browns. However,  if there are larger quantities, they can be used to make their own separate  green layers.   When the bin is turned during  aeration of the waste, the chaff will be distributed throughout the organic material.

Hello I am a high school student designing a product around composting. It is in the context that you have a home compost caddy. https://compostdesignproject.wufoo.com/forms/z19fujpr16mpnar/