Ptaquiloside,a carcinogenic chemical is found in both the bracken fern and its spores. It has been shown that the spores can cause cancer in mice and bracken has been linked to bladder and intestinal cancer in cattle and horses as well as a number of diseases in other farm animals.  It has also linked to human gastric cancer where people, particularly children, eat dairy products where bracken has formed a significant part of the cows diet. In some cultures bracken has been used as a food for humans being eaten  fresh, or preserved, in making  bread,  brewing beer, and the starch from rhizomes used  to make  flour and  confectionary.  It has been implicated in human bladder esophageal and stomach cancers.

In health and safety terms while bracken may be a hazard to humans there does not appear to be any firm evidence, yet, that it presents a significant risk to humans. However, it is better to take reasonable precautions. Physical contact with bracken during harvesting, heaping and turning should be minimised, particularly in late August - October when it may be sporing.    However, the Forestry Commission has, due to conservation restrictions, cut and composted bracken in September and later in the year when it is lignified and drying out.   An advantage of a September cut is that there is low or negligible Ptaquiloside present.

One of the factors that reduce the risk of ingesting the spores is that bracken only spores at intervals of about ten years.  The spores are found in a thin strip on the curled-over edge of the underside of   the fronds but do not usually extend to the extreme tip of the leaflet.

Gloves and a facemask should be worn when handling the plant. The use of gloves to protect the hands is a sensible precaution at any time of year as pulling up bracken stems by hand can result in cuts.

Bracken may also harbour sheep ticks, which may, carry Lime Disease, so it is sensible to check exposed areas of skin after working with bracken

Bracken (Pteridium aquilinum) is a native British fern growing, also found across the world, which grows in both acid and neutral soils in open situations and woodlands. Bracken can reach over 1.5m (5ft) in height it is the only fern that has side branches. In late summer, bracken fronds turn first a golden colour and then brown dying   back to ground level in the autumn and over-winter in this state.  New growth develops from the base in spring.

Bracken spreads by both underground stems rhizomes and spores that are carried by the wind. Bracken has high potassium content.

It used to be cut in the autumn to be used as animal bedding, in tanning, soap and glass making, as a fertiliser (bracken ash), and as a mulch or compost.

It is also cut to restrict spread and cutting while green can be very effective in will eventually eradicate the bracken.  This is also provides a supply of bracken that can be utilised to make compost.

As mentioned above bracken was traditionally used as mulch. The brown autumn and winter fronds can be rotted down in a plastic sack in the same way as autumn leaves are allowed to decompose over two years to make leaf mould.

However, one of the advantages of composting bracken over using it as a mulch   is that it improves the water retention by increasing the proportion of particles of less  than 6 mm in length  (known as ‘fines’).

A higher proportion of fines areobtained if the bracken is cut while green rather whenit isolder and has started to turn in the autumn. In addition to the time of year the size of the fibres in the bracken, also depend on how it is cut.  On a commercial scale using forage harvester, double chopping produces more finely divided material than single chopping. Similarly, at the home composting scale shredding before adding to the compost bin produces smaller material than cutting using Secateurs.

Recycle Now list bracken as one of the greens that can be used in home composting. Fronds can be composted as bracken spores (which might be present) seldom seem to germinate and grow in the compost heap or following composting but small sections of the roots can regenerate, and therefore should not be used when cold composting.

The young green bracken fronds can be composted on their own or added to an existing mixed  cold compost bin or heap and will decompose slowly, enriching the nutrient content of the compost. It is not necessary to shred these young plants but doing so does speed the composting process. Bracken stems being woody are not suitable for composting where a quick turn round is required unless they are first shredded or chopped. If planning to cold compost bracken the brown winter bracken is relatively easy to harvest and   is free from ptaquiloside it is best composted separately as if making leaf mould.

I would recommend that bracken is hot composted with a target temperature of 60C for several weeks as the heat destroys the allelopathic chemicals, produced by bracken,  that restrict the growth of other plants. (Not a feature welcomed in compost) and also breaks down the carcinogenic ptaquiloside.  At lower temperatures, it may take about 5 months to achieve this result.   The addition of cow or horse manure makes an effective activator and if sufficient bracken is cut to warrant a separate heap or bin the manure   can be mixed of ratio of 4:1.to help achieve the required temperature.

The Forestry Commission have composted bracken on a larger scale (using ten-metre long bays).  I include details here for the benefit of those who have a paddock or wooded area being invaded by bracken.  Water was added to the bracken to give minimum moisture content of 70% fresh weight. Up to 40 cu metres of bracken was composted in bays filled to a height of 1.5-2 m. The material was   turned to prevent compaction and to maintain a working temperature in the region of 55-60ºC.

During composting the pH of the bracken increased from acid (pH 5.5-5.8) to neutral (pH 6.5-7.0). If acidic compost is preferred the researchers showed that the addition fertilizers such ammonium sulphate prevented the rise in pH. Allowing the bracken compost to mature also resulted in a degree of reacidification.

Bracken has also been successfully composted in windrows using manure to give the 4:1 ratio used above.  The initial moisture content should be 70% windrows should be turned regularly, when the temperature of the material reaches 60-70C, to aerate the material facilitate the composting process.

As an additional safety precaution it is recommended that the compost should stored in a to maturation bin until the year following harvest to ensure that any carcinogens present in the bracken are broken down. It might be advisable to consider allowing compost made by cold composting to mature for a longer period and it is suggested that the maturation stage is prolonged for at least a full year after the composting process has completed. 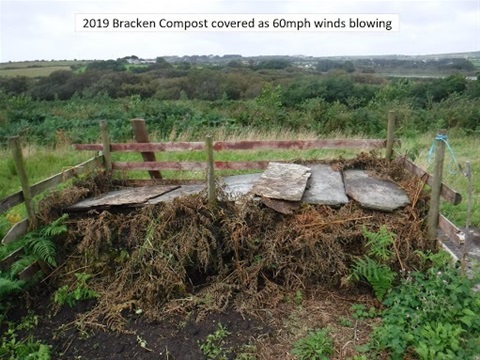 Waterside Farm, 8.17 Acres, Cider Orchard in West  is close to Stithian’s Reservoir in an area of  heathland the unmanaged top-soil pH is 5.5-6.5 and lies in a dark brown almost black layer some twelve inches to 48 inches deep.  Without the enrichment and management, the pH is just below neutral, a slightly acidic granite schist soil. The topsoil was formed from years of wildflower meadow with short periods managed for cattle and horses.  To introduce four acres of woodland and orchard trees the pH was raised to a slight alkalinity by the addition of crushed lime and bone meal where this was preferable to the trees being introduced.

Large areas along the Cornish hedges bounding fields where cleared of Bracken and brambles.  Cleared areas were quickly taken over by the wildflower meadow away from the hedges.  Cornish hedge is made of two inclined granite sides filled with soil and these are occupied by any number of smaller plants which flourish as brambles are cut back.

Approximately  24 cubic metres of compost is created  a year, and this provides feed for a hundred and fifty plus cider apple trees producing currently between one and two thousand litres of cider a year, and three hundred native woodland trees still small saplings.

Bracken is cut with a scythe using a ditching blade, the cuttings are raked into heaps.  Left for a week these heaps shrink and can be lifted by fork and make up the composts in each orchard.

The first of the new year’s bracken is laid onto bare soil  to which   a shovel or two of the previous years compost added.

These are enriched with uncooked kitchen waste, grass clippings from neighbours and the addition of crushed lime and bone meal at about 1lb (500 grams) per cubic metre of bracken.

Brambles, blackthorn and hawthorn pruning’s are burned, the ash added to compost.

Trees in the orchards are mulched as bracken is cut and are fed three times a year, composted bracken is applied at the rate of two to three shovels per tree in February, this suppresses growth near the tree, provides early feed that worms incorporate into the soil before buds open, and provide an insulating layer through the early spring.

The second feed is given as the leaf buds open but before blooms open, acting as a mulch to supress growth of other plants over the roots.

A third feed is applied in August as fruit that are set are beginning to swell, this feed is of three to four shovels per tree.

Any remaining compost is reserved as a starter or accelerator for following years compost heaps. . 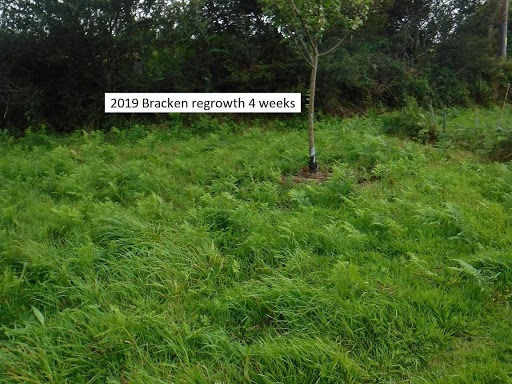 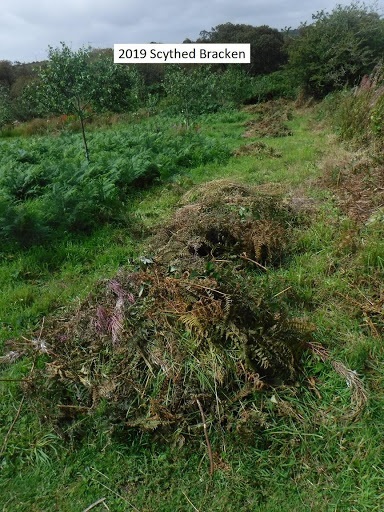 To the right is an area scythed four days ago. To the left bracken ready to be scythed. 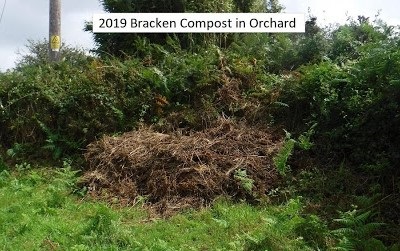 Heaps are turned by hand once a week 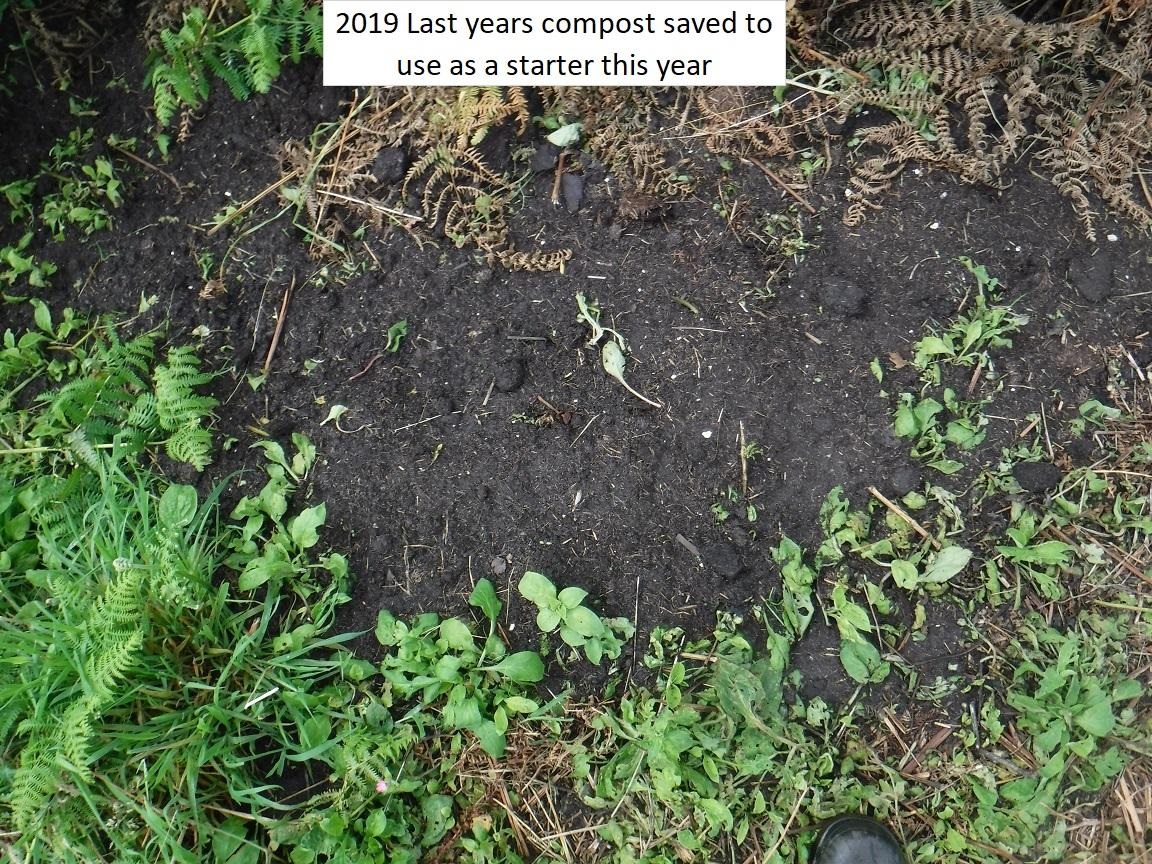 This will be used as a started for the new heap

Photographs of the plant in various stages, including sporing http://wildflowerfinder.org.uk/Flowers/B/Bracken/Bracken.htm).

Some time back I think Monty Don said that he used bracken to make ericaceous compost. Is that right?

I've got access to a reasonable sized patch which I could harvest for my azaleas!

I want to make an ericaceous compost from brown bracken harvested in november how is the best way to go about this? Are there any problems associated with its use?

Thanks for your helpful information. My main composting problem is the excess of summer grass mowings until autumn pruning time. I have common rights to collect bracken - problem now solved!

A cider orchard in Cornwall, UK we scythe cut bracken while green and mix with some of the previous years compost as an activator adding bone-meal at 1Kg per cubic yard (metre). Use after 6 months.

Hi Andy, what is your ratio of bracken/manure? I couldn't work out from the article if it was 4 pts bracken to 1 pt manure, or visa versa!
Do you add the bone meal to compost mix or on application? :)

Thanks for your suggestion . They are now added to the list of materials that can be composted and are the subject of todays blog.

Hi. I love this site and visit regularly. One thing I can’t see covered is spent hops which I assume I treat as a “green”. I have tried a couple of times layering with horse manure and it seems ok.

Thought I could beat Google with ‘composting bracken’ but, lo and behold..., up pops this great site! Thank you for such clear and useful information.

Thank you. I am always looking for new topics and suggestions welcome