Halloween : The Festival of Food Waste 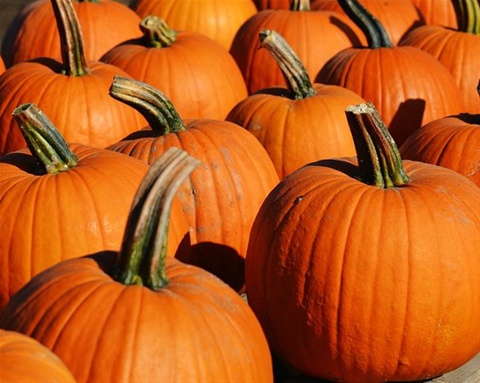 It is estimated that in the UK up to four million pumpkins are brought to carve and display over Halloween with the edible flesh of these pumpkins being discarded as waste and ending up with most of the lanterns in landfill. This produces an additional 18,000 tons of landfill waste directly attributable to the Halloween festivities. This, according to the environmental charity Hubbub, is equivalent to 360 million portions of pumpkin pie.  The U.S. Department of Agriculture states that 1.91 billion pounds of pumpkins where grown in the USA in 2014 most of which, as in the UK, where used for carving and then thrown away,

Much of this waste is due to people being unaware of the versatility of pumpkin flesh as a food or not realising that the fresh discarded when carving the pumpkin can be eaten. It is calculated that in the UK only 33% cook the fresh of the pumpkins they carve out. On this basis, farmers are growing acres of food just for it to be thrown away. If carving pumpkins save the seeds they can be  roasted to make a tasty snack. Separate them from the flesh, wash away the fibrous strands and roast them for a few minutes. they can also be dry fried.

While the most common variety for pumpkin grown for Halloween carving in the USA (the Howden) may not provide as much flavour as varieties grown specifically for eating but still make tasty soups and pies. There are many very tasty squashes and pumpkins suitable for home and allotment growing that can be used to carve different shaped lanterns these all have flesh high in fibre and beta-carotene that should not be wasted.

Carve it,  Cook it, Eat it, Compost it

Join us in reducing pumpkin waste while celebrating Halloween

In recent years, the environmental charity, Hubbub has organised Pumpkin Rescue events to increase awareness of pumpkins as a food and a composting resource rather than just Halloween decorations.  The Pumpkin Rescue may events include: 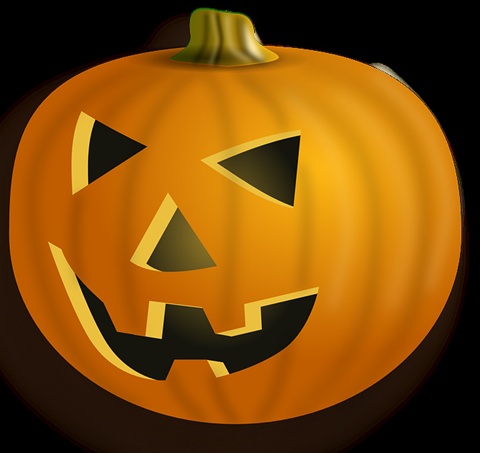 As composters, we can at least deal with the remains of lanterns at home or in schools, and pumpkins grown for allotment and village Biggest Pumpkin competitions, as part of our efforts to reduce waste sent to landfill.

In composting terms, Pumpkins are classified as Greens, being high in nitrogen, and will rot down to produce compost in six to nine months

Before starting to compost pumpkins used as lanterns all items used decorate the lantern should be removed e.g. candles, wax, aluminium foil etc.  If a cold composting or trench techniques is to be used remove any remaining seeds from the pumpkin otherwise they may germinate in the bin or when the compost is used.  If the Pumpkin has been treated with a preservative to prolong its use as a lantern those parts that have been treated should not be composted.

The larger the surface area exposed during composting to the composting microorganisms the more quickly it will be composted so the normal advice is to smash or cut the pumpkin into small pieces. Smashing a pumpkin with a hammer is part of the fun for children   http://earth911.com/home-garden/putting-jack-to-work-how-to-wickedly-compost-pumpkins/  and it is true that this can be a way to encourage children to participate.  I prefer to use the back of a spade to a hammer as it is quicker, easier and produces more of an easily composted “mush”. Pumpkins are easier to smash if they have been kept in the warm and have started to rot. 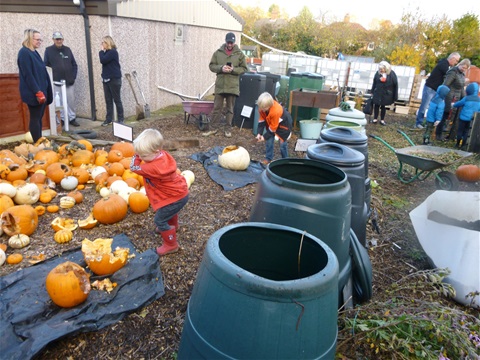 The 2021 Pumpkin smash was held on Saturday 13th November   at  Stokeswood Allotment Compost Demonstration site,  2b  Stokes Drive, Leicester, LE3 9BR . We had over 200 pumpkins to smash and compost. We will be looking for local school to take part in the 2022 Smash.

Several pubs donated their pumpkins including several that had not been carved. Next year we would like  to donate whole  pumpkins a local community fridge or food bank. Please contact carryoncomposting1@gmail.com

The simplest way to compost carved pumpkins is a form of pit or trench composting. Find a sunny spot in the garden which will not be disrupted until the next summer, dig out a shallow pumpkin grave about a spit deep make a bed of vegetable leaves, peelings and other compostable materials in the bottom place the pumpkin in the middle and smash it.  If a large number of pumpkins are available e.g. from a club, village or school carved pumpkin competition a shallow trench can be dug, and the pumpkins spread along it to be smashed in situ or they can be smashed on an old compost bag and the mush tipped into the trench. Either of these approaches can be quite messy if children are involved which adds to the experience. Cover with soil or compostable materials such wood chip, sawdust or leaves.  This is a variation on the traditional trench composting technique. Some sources suggest including fallen autumn leaves in the bed upon which the remains of the pumpkin are tipped. However, if the covered compost trench is to be used next year to grow more pumpkins or other vegetables this can be counterproductive as some leaves contain growth inhibitors that will that will inhibit the growth of pumpkins and other plants or be of the wrong pH. I would avoid using leaves if possible turn them to leafmold. 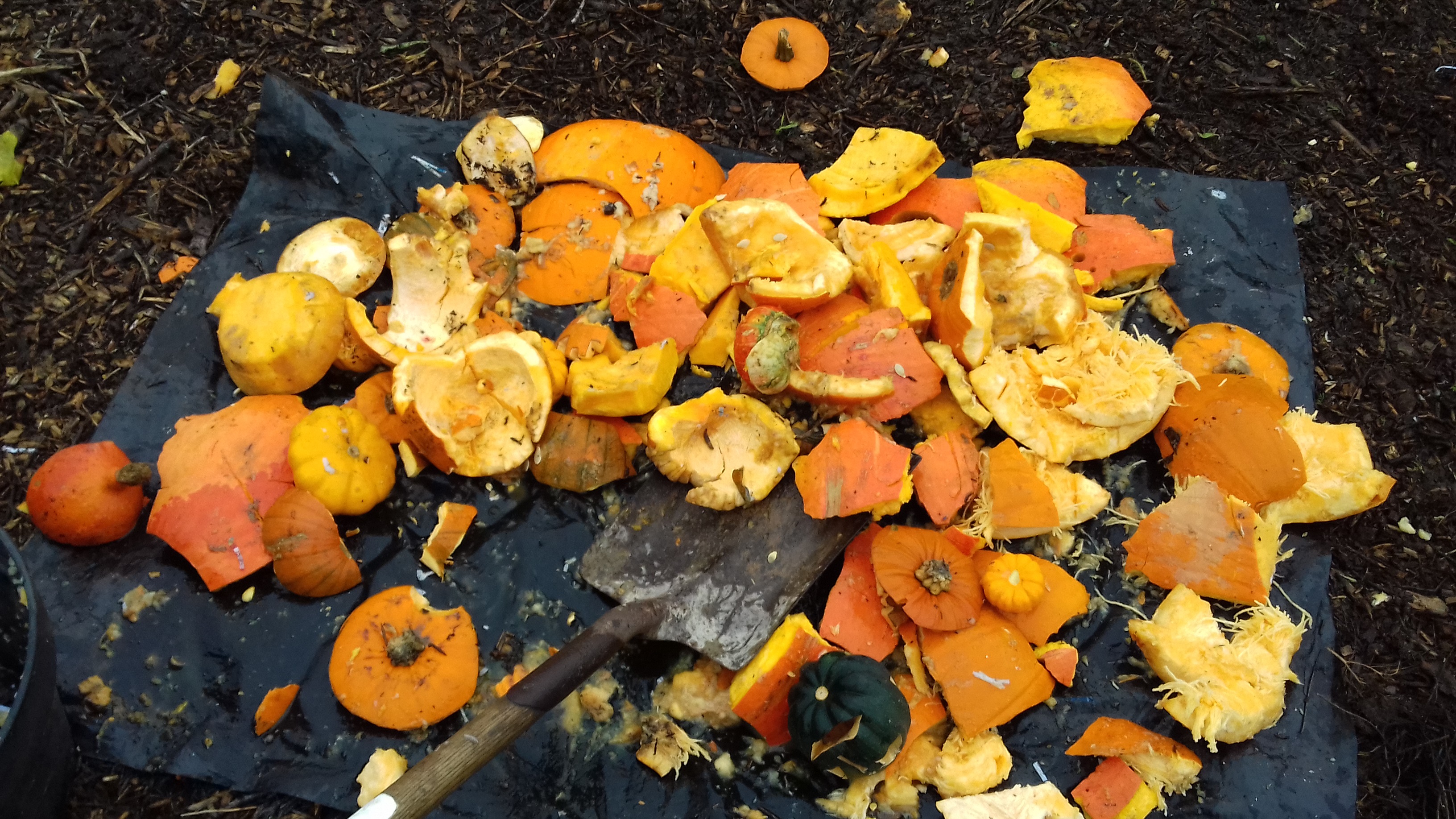 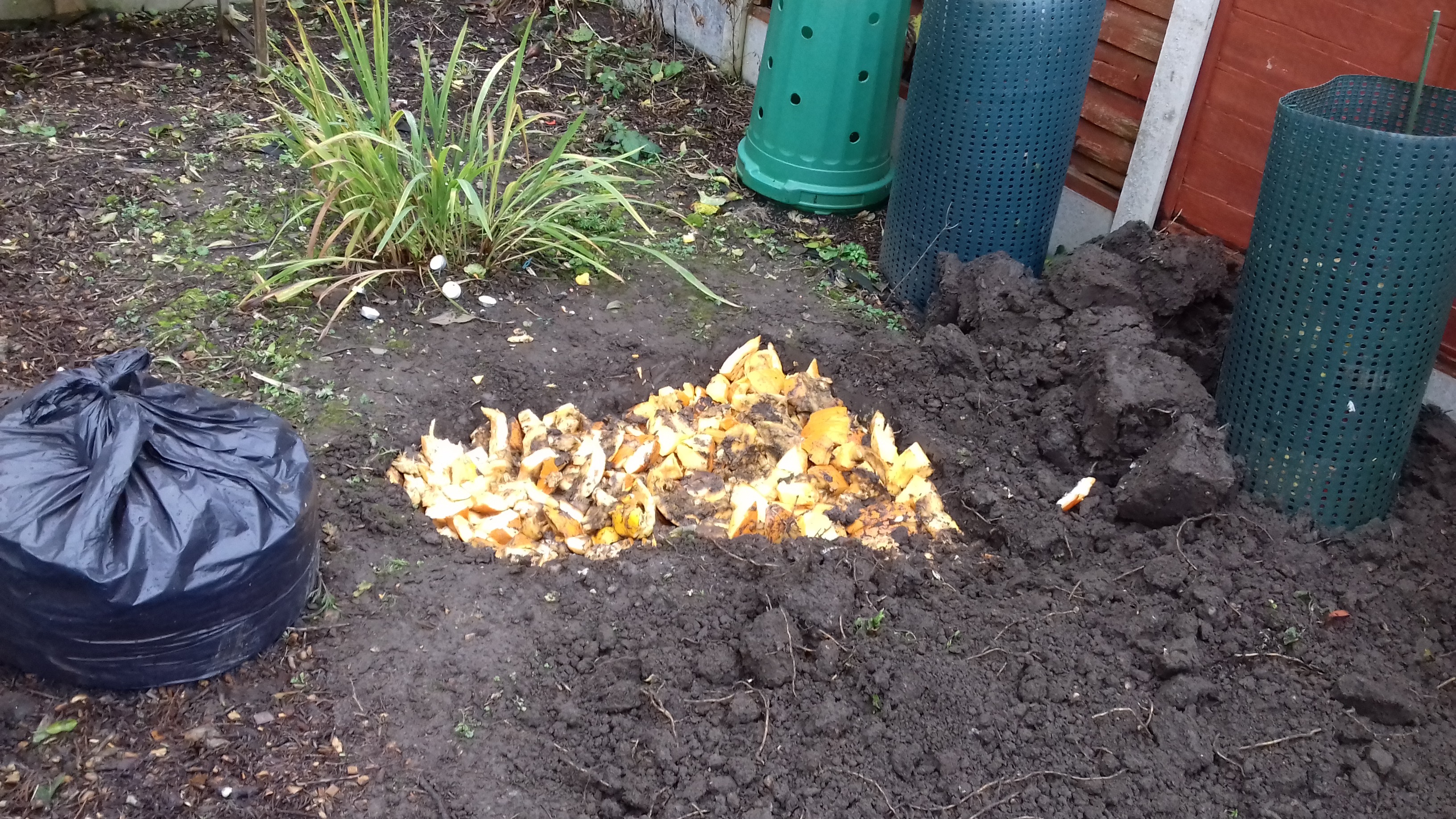 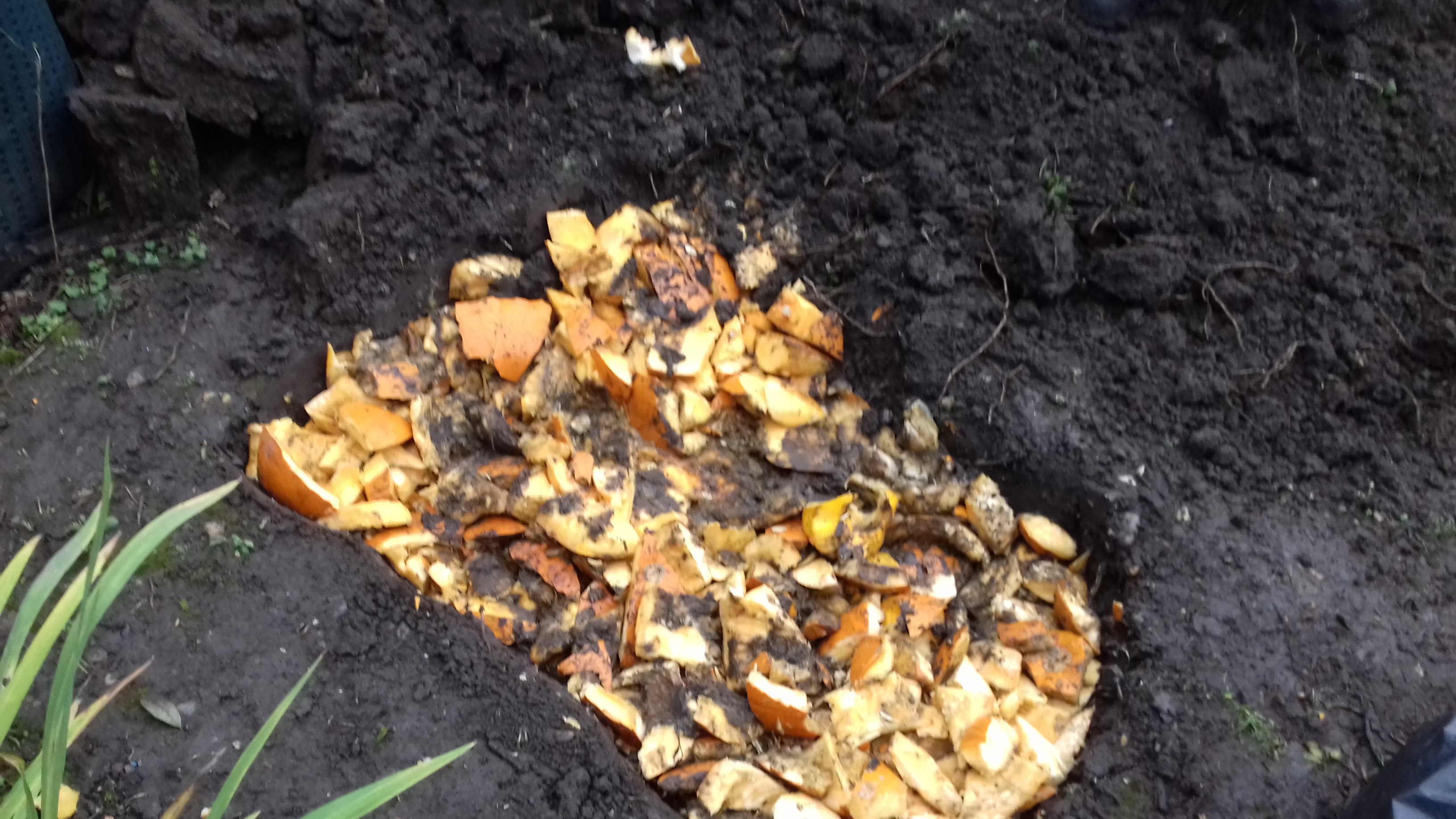 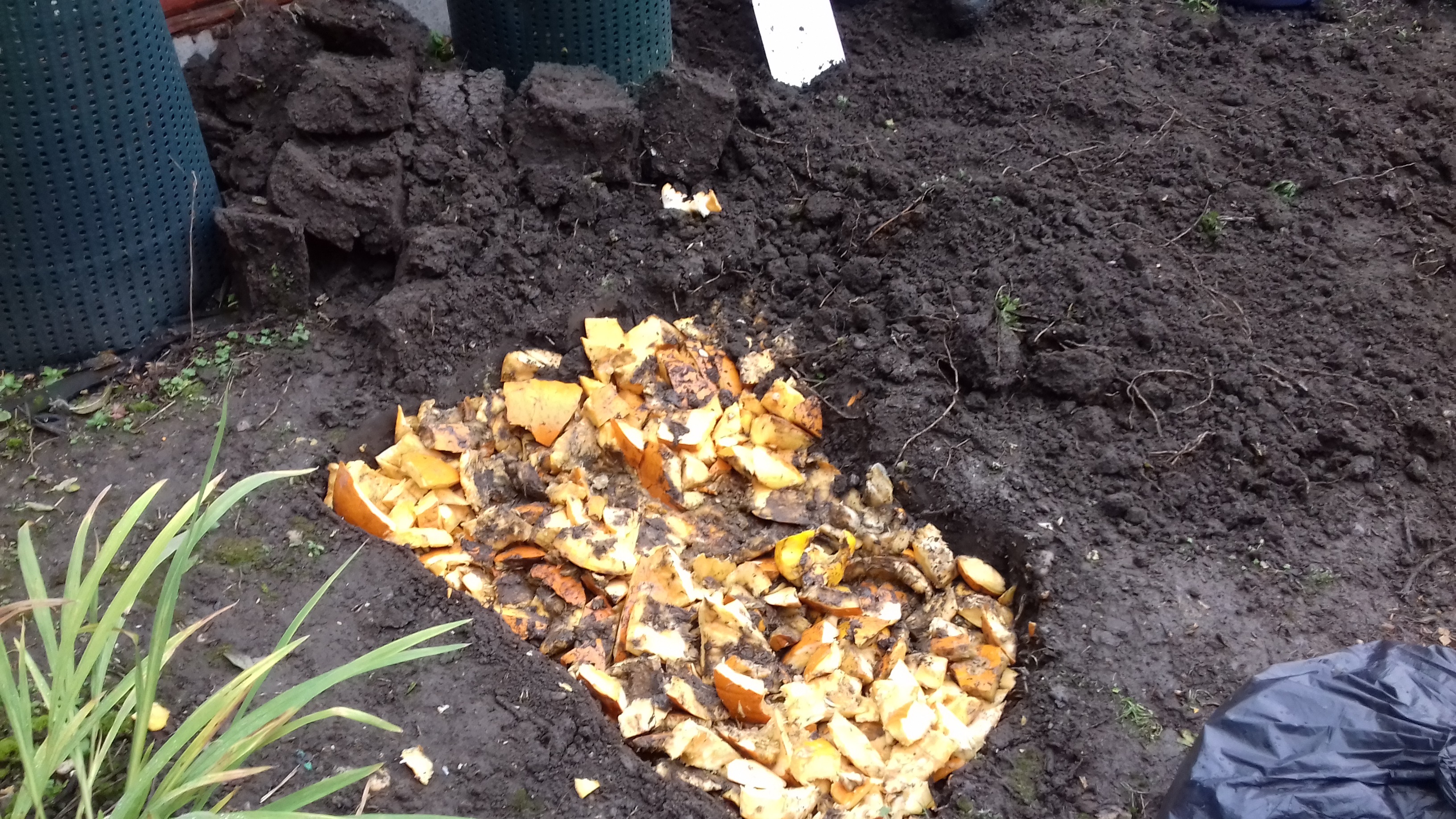 A variation on this technique is to put the pumpkins in an old dustbin, smash it using a shovel, and then add leaves to the container mixing well before spreading in a depression in the ground. Using this technique, you can build a garden mini-windrow adding alternate layers of hay, leaves and uncooked vegetable food waste together with cardboard and other compostable material until it is about 2 feet high. The pile is then   soaked with water. The windrow is then covered with a black polythene sheet or tarpaulin and left to decompose. More information on this technique at http://www.redwormcomposting.com/winter-composting/winter-worm-windrow-11-29-10/

The remains of the pumpkin are added to the compost bin. Pumpkins are classified as Greens in composting terms being high in nitrogen and should be covered or mixed with a layer of browns, such as dry leaves, shredded paper or cardboard, to maintain the balance of Greens and Browns and to discourage flies and other pests. However, one source suggests that pumpkin is mixed with dried coffee grounds, another green, before being added to the bin. Giant pumpkins can be smashed and frozen for composting
Pumpkins that rot before harvesting can also be composted.

The photos show composting pumpkin in a pallet bin as this makes it easier to see the pumpkin layer. We also added pumpkins to our Hotbin, Green Johanna and a variety of plastic bins. 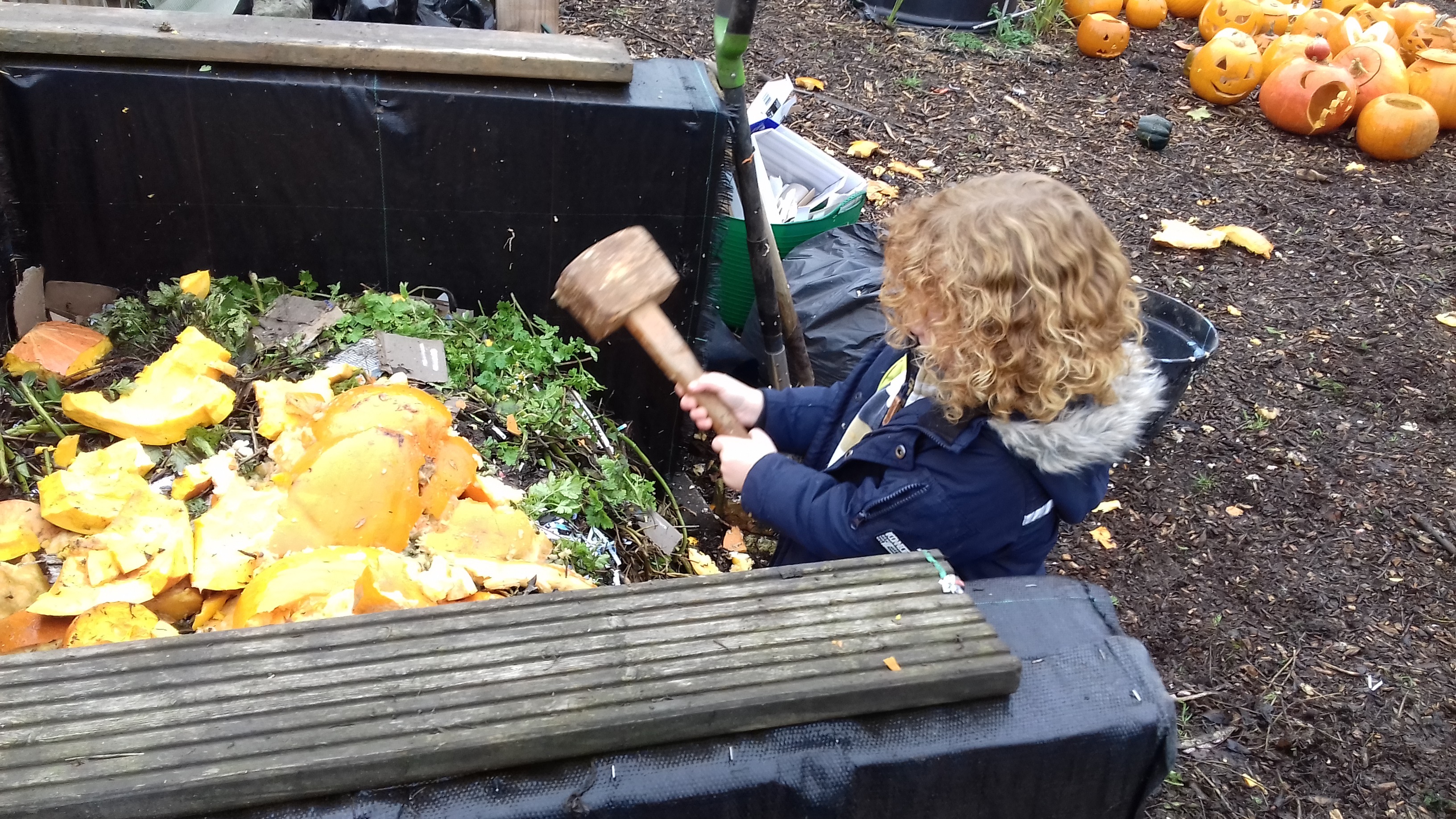 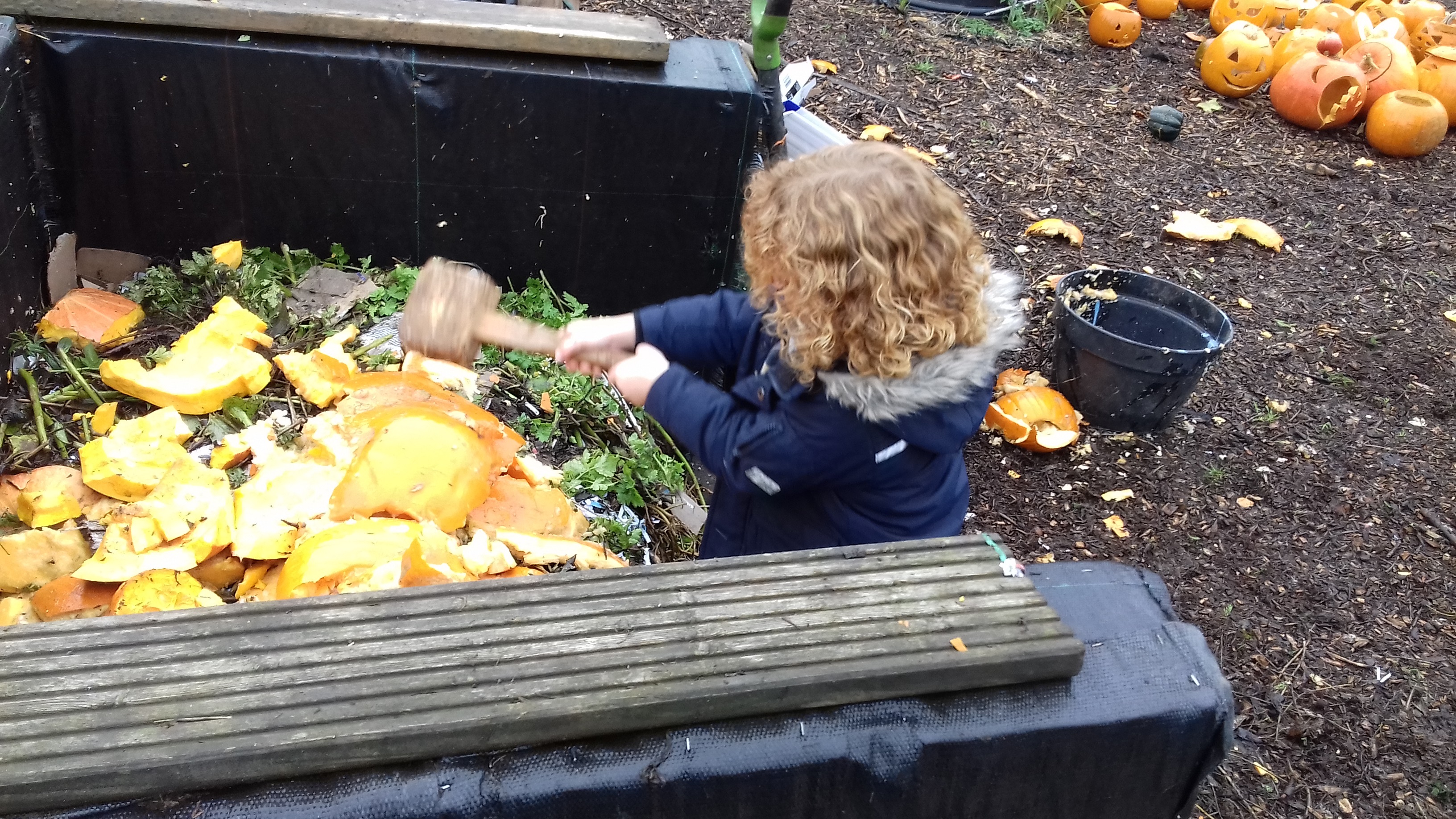 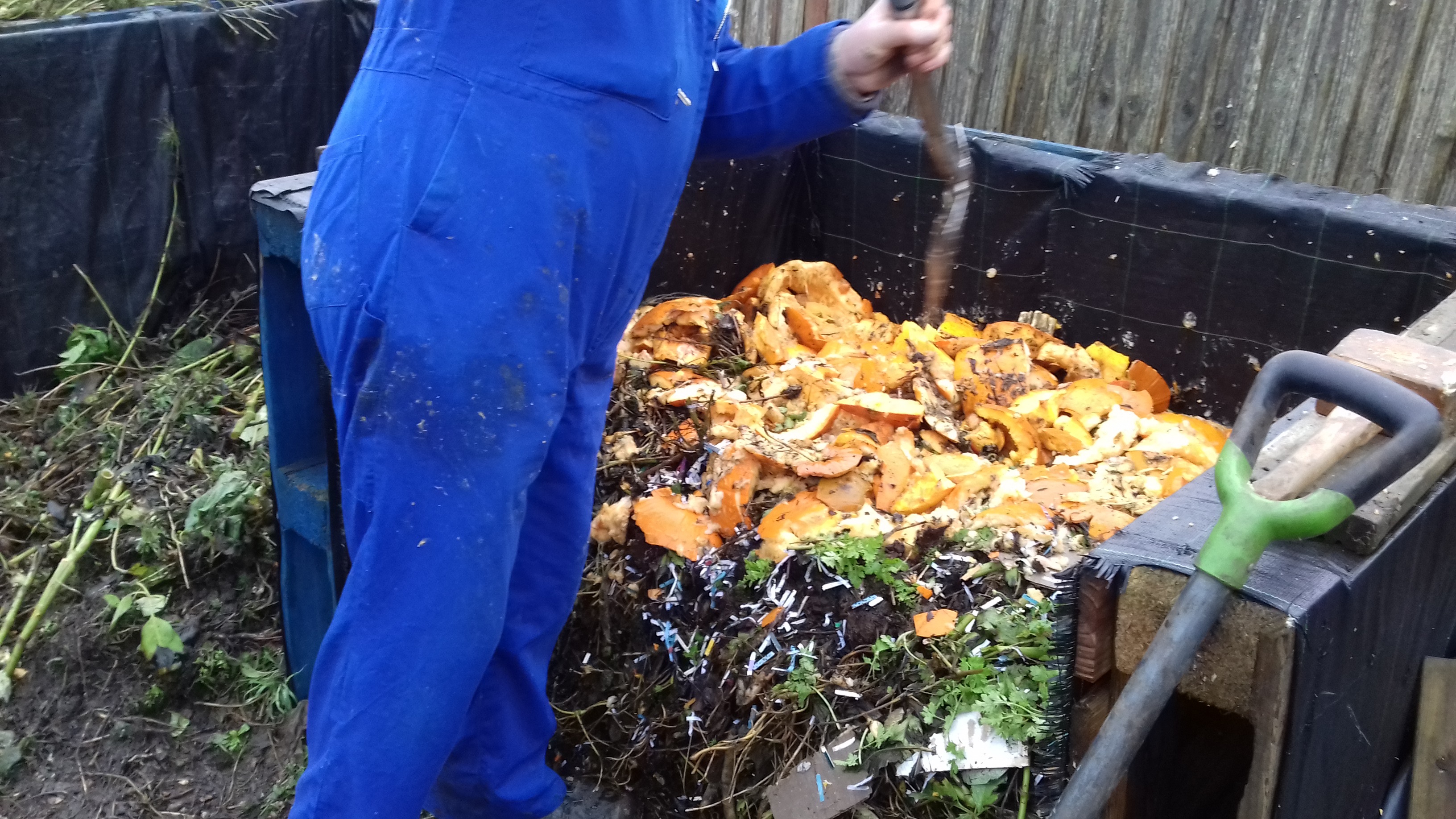 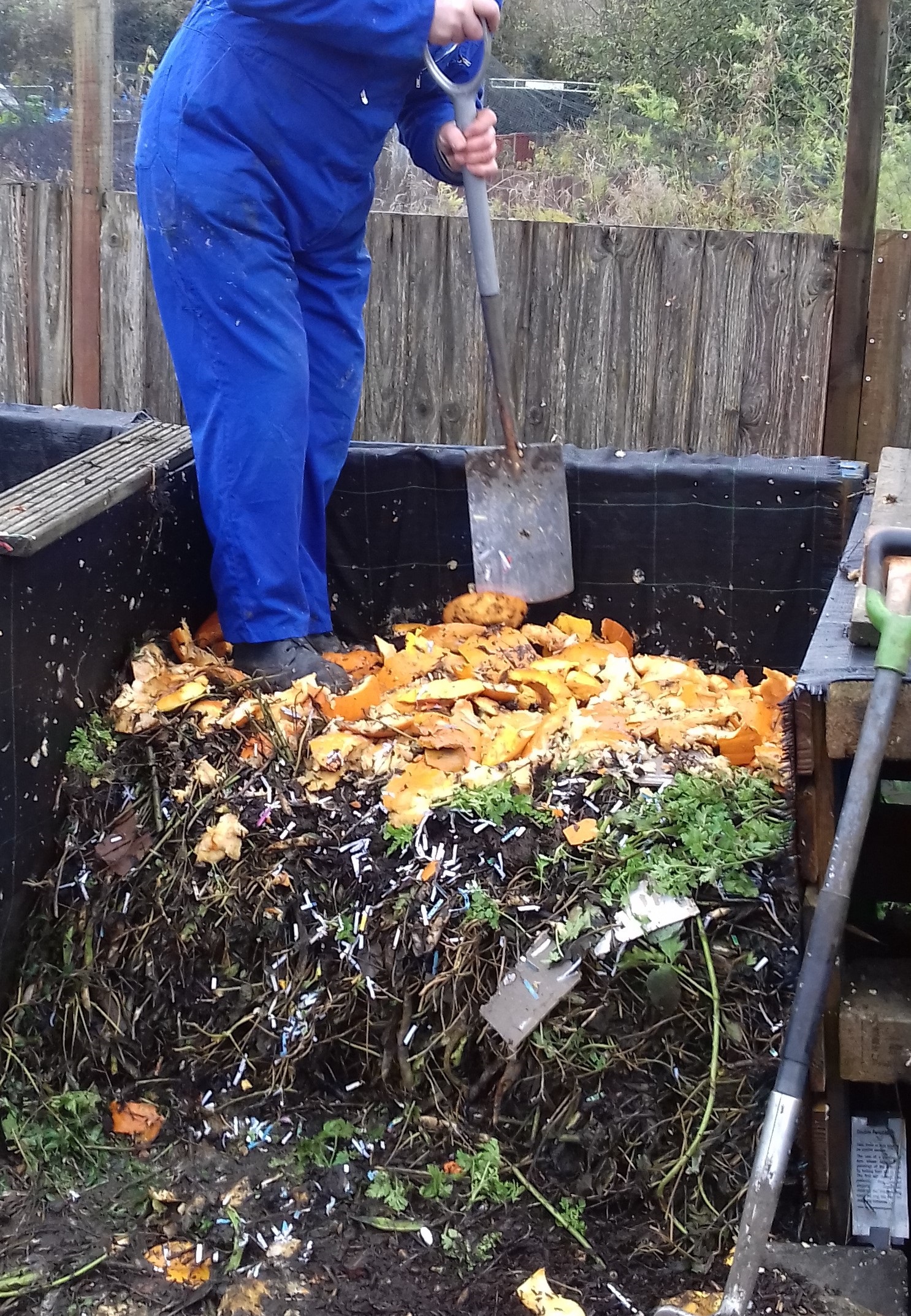 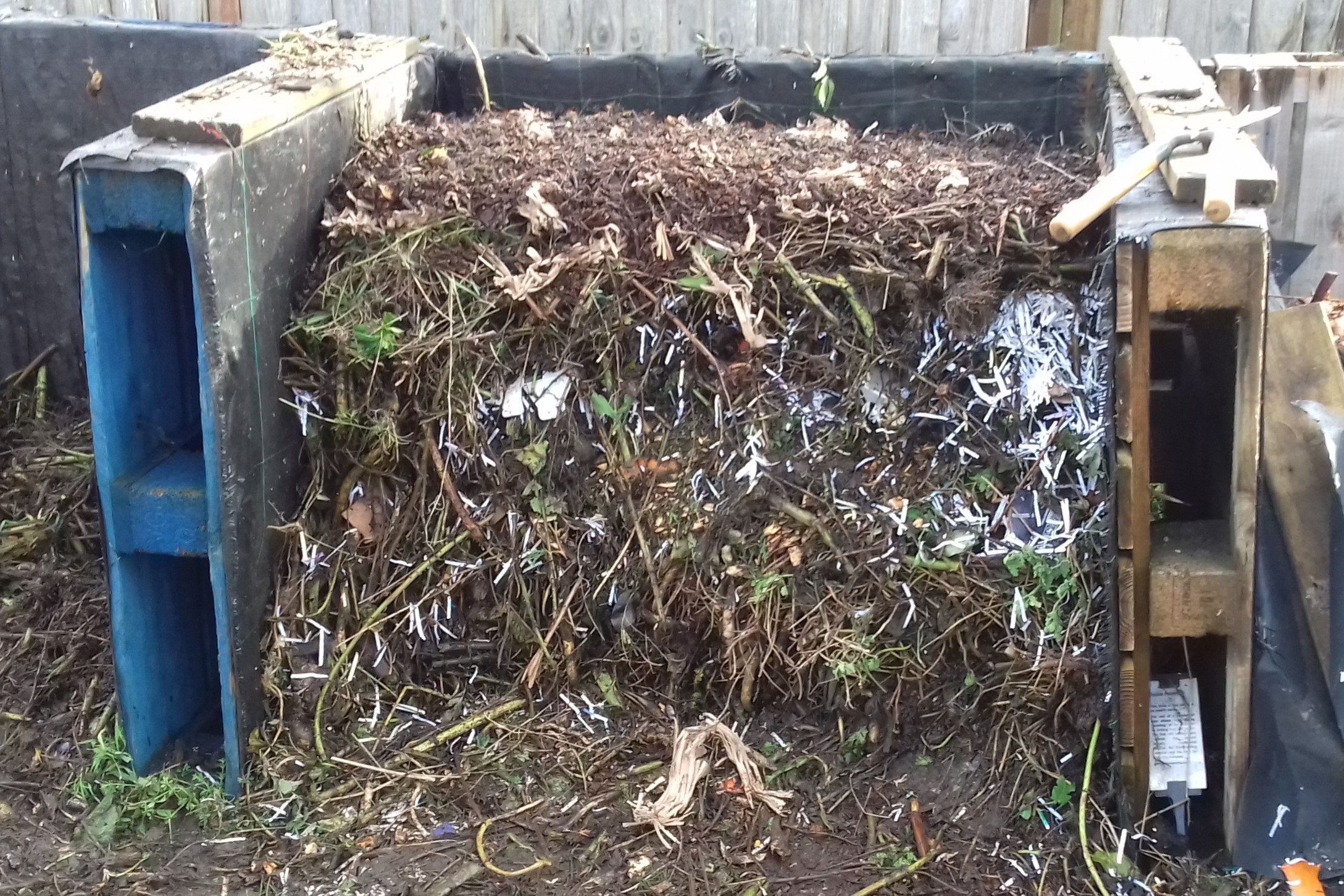 Composting Pumpkins in a Wormery

Pumpkins can also be composted in a wormery and are said to be one of the favourite worm foods. The worms prefer their pumpkin soft and in small pieces. Therefore, after smashing the pumpkin any large pieces should be   chopped using a kitchen knife.

As one of the main causes of worm death in a wormery is overfeeding, the amount of pumpkin given to the worms should be rationed, with the pumpkin being divided between that which will be used immediately, that being used within a week, which can be stored in   the fridge while the rest is frozen. Freezing not only helps avoiding overfeeding the worms, provides a stock of suitable food for the winter months it also softens the pumpkin making it easier for the worms to eat.

Rotting pumpkins from the garden can also be composted in bin or wormery. Smashing these would cause a mess so I would suggest that they are cut into segments, using a spade, and added to the bin. These will take longer to decompose than smashed pumpkin. In a wormery, the worms will take longer to eat them but if you check after a day or two you will find the worms busy snacking away underneath the pieces

After adding pumpkin to the wormery cover with a layer of bedding, shredded paper or cardboard.

Waste pumpkins can be fermented in a Bokashi kitchen composter.

Bokashi composting can deal with all including cooked and raw meat scraps, cooked pasta vegetables and other leftovers including pumpkins.

After smashing the pumpkin, the pieces/pump are added to the Bokashi bin in the normal way with a tablespoon of Bokashi Bran per inch layer of pumpkin. Squash down the pumpkin waste as with any other food to remove any pockets of air.  Replace the lid to seal the container after each addition. Once the bucket is full, ensure that the lid is fitted correctly and leave it for ten to fourteen days. The liquid should be drained off every other day.

In normal use it will take two people about a 30 - 45 days to fill a bin depending on its size. However, at Halloween a good size pumpkin can fill a normal Bokashi bin.

Some Councils will collect pumpkins as part of the normal  food waste collection others will make special arrangements such as  providing drop off sites for pumpkin disposal  after Halloween others still send them to landfill. If you cannot eat and compost your pumpkin check the situation in your area.

As for home composting the decorations should be removed. If a drop off point is being used the whole (not smashed)  pumpkin or lantern should taken for collection