Worms will gain access to any compost bin that does not have a base, i.e. is open to the ground, and eventually those with a base and sometimes to tumbler bins where the drums are up off the ground. However, worms do not have magical powers allowing them to appear in a compost bin out of thin air they  and their  eggs and  casts are transferred when organic material from the garden is added to the bin e.g.  in soil on roots,  on plant material.  When they gain access, they play an active role in the composting of the organic material. With hot composting system the worms, and their eggs  cannot survive temperatures over approximately 35°C and will if possible move from the hot area to any cooler zones in the bin (often at the base), or retreat into the soil if the whole of the heap exceeds the temperature at which they are happy. They will reappear during the cooler maturation, curing or  aging stage.

There are  occasions when worms appear at the top of the heap or bin larger numbers. This often occurs in the spring where the compost has provided a warm shelter for the worms during the winter months and a readily available  food supply when the warmer weather at the start of  spring encourages  breeding and a subsequent increase in numbers. A breeding surge can result in the addition of  hundreds of baby worms in a bin. Adults found at the top of the bin may just be trying to escape from overcrowding in the bin and given a little time  the population will balance itself without any problems. Alternatively, the surplus worms can be removed to another bin.

On other occasions, practically during the summer, when even cold composting systems will warm up,  due to the addition of green material and rise in  ambient temperature,  worms may  can be found  crawling up the walls and over the lid of the bin to escape to a cooler environment. Some composters put a crumpled up empty compost  bag in the top of the bin to provide a temporary home to these worms.

L Zirbe at the  University of Liege in Belgium found that the  earthworm Eisenia fetida forming  balls had a role in communication. The worms used ‘touch’ to communicate and the exchange information as a result of which they will then collectively move in the same direction. http://news.bbc.co.uk/earth/hi/earth_news/newsid_8604000/8604584.stm

Worms are also thought to form balls  when faced with unfavourable environmental conditions. The theory being  that under these circumstances   the balls offer a form of protection. It has been found  any  "stressor" can result in them balling up. These can include: 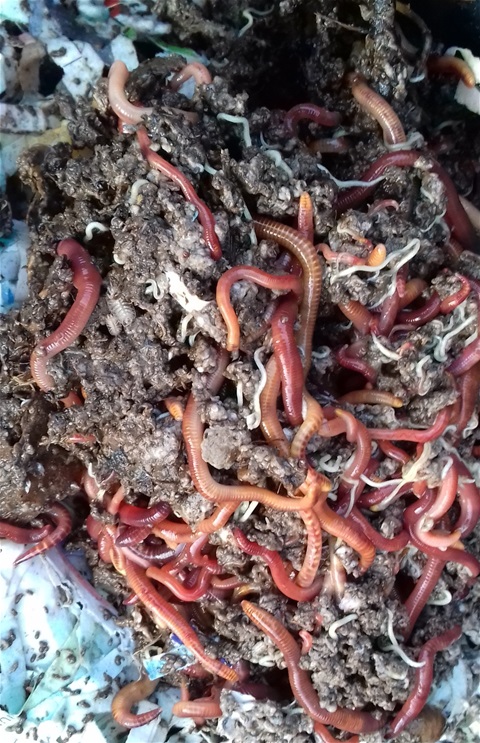 The optimum temperature  range for composting worms is 12 - 24°C and will they not survive above 35°C. They will try to escape  the heat in compost, during the thermophilic phase of hot composting by moving to the lower levels of the bin or back into the ground. During batch composting where the contents of the bin are not being regularly turned  the whole compost should not reach unfavourable temperatures  at the same time allowing the worms to move to the cooler areas at the bottom or sides of the material or the top of the bin.

During the more commonly used  cold composting technique the temperature  will not reach that of hot composting but  parts of the bin  can still get quite hot  following the addition of  food stuffs that are high in nitrogen such as  grass or  leafy green, Aerating will help reduce the temperature by distributing the hotter material across the bin.

If worm balls appear in a bin, I would recommend using a thermometer to  check the temperature at   different levels in the compost. I use to one with a 5” probe and another with a  26” probe. Some composters crumple a plastic garden bag or old compost bag at the top of their bin to give the worms somewhere to escape the hot material.

I have found that woms will also form balls in the wormery when subjected to cold weather. The photo shows a worm ball which formed during a cold night when the temperature dropped to below freezing when the wormery had not been protected from the frost.

If too many Greens have been added to the bin and the material is too wet and air cannot circulate freely as a consequence it may have  turned anaerobic  the worms may   migrate to the top of the bin in order gain access to oxygen so that they can breathe. A moisture meter is the scientific approach to checking moisture levels in compost but using the “wrung-out sponge” test i.e. taking  a handful of compost from  different levels in the bin and squeezing it can provide an indication as to whether the material is too wet.

Adding and  mixing in some fresh, dry carbon  rich  “Browns” such as cardboard, sawdust or woodchip will help absorb the excess moisture and provide addition aeration

It is said that worms may also “ball” if the compost is too dry.  I have not experienced this  and feel that if the organic material in a compost bin is too  dry the worms will remain in, or migrate to, the soil. However, it may be a problem in a wormery or a sealed composting system the answer is to add water or the “sludge” from home-made compost tea or plant food but not so much liquid that  the wet bedding  heats up as  warm bedding is undesirable in a wormery.

Any recent changes in conditions might be the cause of  the worms forming balls. This can include changes in  the materials being composted , i.e.  a significant volume of Greens (nitrogen-rich) or   foods acidic foods (citrus, tomatoes, onions).  Excessive amounts of coffee grounds have also been suggested  by one source as a potential cause.  I feel that the  key word is excessive as coffee grounds are  a recommended and valued addition to compost bins. One American website  advises  that that coffee grounds should not make up no more than 15 to 20% while another source recommends that it does not exceed 20%of the total compost. (https://ucanr.edu/blogs/blogcore/postdetail.cfm?postnum=12978)

The addition of acidic food can change the PH of the bin and it is worth  checking  the pH which should be neutral (pH of 7).  Adding crushed eggshells may help lower the pH and aids the worm’s digestion by adding  grit.

This was extremely helpful. Thankyou

Thanks for the info, living in Chile i've noticed I have a lot of aporrectodea's in my compost pile.