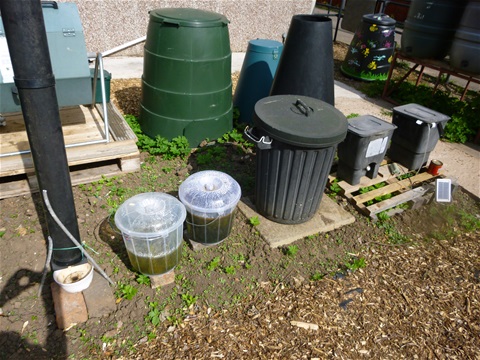 A "comfrey tube" plus plants being soaked in buckets, bin and Bokashi bins

The traditional method of making plant food by soaking the plant material was to weigh the leaves down in the bottom of a bucket or water butt with a stone and wait until it decomposed. Ideally the container would have a lid as the product would have a strong unpleasant odour. I understand that the technical term that they stink.

However, as gardens have become smaller with  less material to turn to food and space to hide an extra water butt several small commercial systems have come on the market and then dissapeared.

On our Composting Demonstration site,  at Stokes Wood Allotment, Leicester,  we use  lidded nappy buckets for demonstrating the use of  small volumes of plants such as dandelions and horse tail so that visitors can see the decomposition in progress.

Mixed weeds being killed are  soaked in a dustbin while the plants used in larger quantities being soaked to produce feeds  e.g.  comfrey  is soaked in old Bokashi bins or water butts enabling the liquid to be run off while most of the sludge remains in the bin.  It helps speed the breakdown if the liquid is stirred vigorously every day of two.

There is a difference between making Plant Feeds by soaking  and drowning perennial weeds to kill them to make them suitable for composting. The process of drowning perennial weeds will require  soaking over weeks, months or even a couple of years(?)  to kill weeds  while soaking leaves and green shoots to make a liquid feed will only take  days or two to four  weeks (depending on the technique and equipment). When  making liquid feeds only the young green parts of the plant are used carefully avoiding the use  roots of perennial plants   and seeds which may survive the process if the sludge is added to a cold compost heap.  Chopping and tearing the greenery into small pieces will speed the decomposition.

The plant material can be contained in a plastic mesh tube or in a pair of old tights to reduce  the need for filtering the product. I prefer a commercially available compost sack, or bag, sold to be used in the making of Compost Teas   If unbagged material is used and  it is not filtered the sludge will block the rose of the watering can, or spray, when being applied.

The effectiveness of the process can be influenced by the position of the buckets in the garden and of course being biological decomposition, it will occur best at temperatures favourable to the microorganisms involved. Within the range 12°C to 25°C is best.  While some direct sunlight  very strong sun over a period may cause the container to fad!

Ideally rainwater collected from the roofs of sheds or greenhouse. If tap water must be used it should be left standing  for at least two days. After which the pH should be checked and a little  spirit vinegar if it needs acidifying  to bring it to a neutral PH.

Several commercially available systems designed for the urban gardener with a small plot have appeared on the market since this website was started   and we  have used three on the demonstration site and at events.

By far the best ais the Hozelock Biomix  which I use regularly and recommend for thos who only want to produce limited quantities of liquid feed.

A second system  the Natural Plant Food maker is still advertised on Google, but marked as unavaialbe at the time this revision was made, so I have still included details below  for the present.

This low-priced plastic food maker will make  4 litres of liquid fertiliser from green waste and can be kept outdoors  in the  garden. The green waste is put in a rigid plastic mesh basket and the four litres of  water is poured into the bucket. The mixture is aerated by gently lifting the integral plunger on a regular basis. Two to four times a week is recommended but I would recommend daily  agitation if possible.

The plant food will be ready for use in 3-4 weeks and can be dilute up to twice the original volume (1:1).

I had an early model  of this  plant food maker some years ago and found that the plastic mesh basket was a problem. After some months use the basket in which the green leaf waste is soaked  distorted and the clips no longer held it together. We ended up using rubber bands to keep it closed. I have brought a second model  for use on our  demostration site three or four years ago  and while the basket appears more rigid one of the clips was broken.

This model appears to be unavailable at present.

A second syatem, the Burgon  & Ball Organic Plant Food Make,r consisted of a lidded stainless steel bucket with  a central tube in which the leaves where contained during soaking. Is no longer made. I still have one butthe bucket  it developed a leak

The third and in my opinion by far the best build quality and suitability for use  is still advertised  and I use mine regularly. 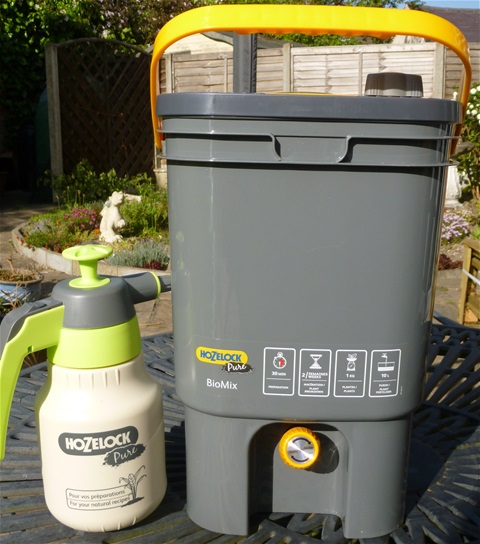 This 19 litre Biomix  food maker is a quite  expensive  but is well designed and made, and it  feels as if it will give years of use to the home gardener. It is also easy to use and contains the smell associated with making liquid feeds.  Hozelock also make the point that the Biomix pays back its purchase price after only two uses when compared with buying  packs of plant feed!

The  tank has a lid which includes an external stirring  knob allowing the stirring fingers to be rotated inside the tank without opening it and releasing the smell. A viewing window is provided in the lid  The inner tank has an integral strainer to separate the liquid feed from  the plant debris. A drainage tap enables  easy decanting of the food.

A cotton filter bag is supplied  for the additional  filtration of plant fertiliser, to prevent the  sprayer nozzle becoming clogged.  I like this system and  using it on the demonstration site and at home. Photos below show it being used with banana skins  an activity I recommend to school garden clubs.

When using this equipment approx. 1kg of green plant material e.g. leaves and in some cases stems but not roots or seed heads are cut into as small as possible and put into the tank. 10 litre of rainwater is added and the lid put in place. The liquid is stirred throughly at least every two days.It can be difficult to stir if the leaves  are not cut small enough.  After about 10-15 days bubbles will stop rising to the surface of the liquid indicating that the macerating is complete. The liquid is run off and filtered into an opaque container unless it is to be used straight away. A cotton filter bag is supplied  for the additional  filtration of plant fertiliser, to prevent the  sprayer nozzle becoming clogged.  I like this system and will be using it on the demonstration site .

The fertiliser is diluted between 5% and 20% for application by spraying or watering can.

Please note these systems are not designed to kill  the plant material  by drowning if this is required the weeds it should be left soaking in a bucket or bin for a longer period until it has all formed a black mush. This may take several months or even two years depending on the weed. See Plant Liquid Feeds

The Composting Demonstration Site is at Stokes Wood Allotment 2B Stokes Drive Leicester. It is normally open 10-12 on Wednesday mornings (Coffee and cooked breakfasts available)and by appointment

Great indeed! Where in Leicester can these be seen ?