We are often advised that as perennial weeds will survive home composting using cold composting techniques they should not be composted at home but put in the “Green” bin to be collected by the Council as part of their kerbside collections. This will mean that the weeds are hot composted by the council and then can be  purchased back by the home gardener as part of commercially available composts.

However in most cases there are options available to the home composter faced with perennial weeds involving pre-treated so as to make them safe to be cold composted. These options include drowning, ( See  Plant Liquid Feeds)  desiccation and starvation/light deprivation for at least two years.

Before considering composting plants that may be toxic or invasive please check the advice on the  Toxic Invasive Plant page.

While normal cold composting, using a one year cycle, may  not kill the roots of perennial weeds composting in a covered heap, from which the light is excluded. A  period of two years has been reported as being effective for many perennial weeds. Turning the heap raises the temperature and will reduce the number surviving .

Charles Dowding https://charlesdowding.co.uk/advice-on-making-compost/  composts   perennial weeds, including bindweed, docks, nettles, buttercups, dandelions and couch grass in a layered bin turned once. Weeds with   soil on their roots can be included. The weeds will break down even in winter’s cooler heaps and regrow only if left exposed to light.

When I took on my first allotment plot it was covered in perennial weeds and I took the lazy approach of making a pallet bin using four pallets, filling it with weeds, turning it just once when the bin was full and leaving it, covered, until some of the pallets rotted. Although there were a few roots struggling to survive on the surface where some light had seeped in, the compost was excellent.

When using this and any other method of treatment on this page it is recommended to check the compost at the end of the treatment to ensure the absence of living roots before use.

ASK Organic  (http://askorganic.co.uk/composting/perennial%20weeds.pdf) recommend using a separate plastic compost bin so as to ensure that all light is excluded which may not be possible if using a wooden bin. The material is kept covered in the bin for two complete years to rot down.

Where  perennial weeds are growing in turf or grass which must be cleared, as may be the case when taking on a new or neglected plot, a  turf stack can be used. The  turves should  be lifted and neatly stacked green sides together. The stack is then covered by a black plastic sheet and left for up to  two years by which time they will have  rotted down to form a quality topsoil. This method can be used successfully to deal with couch grass. The next section describes the use of a stack or mound to deal with weeds resulting from plot clearance.

Bins of weeds left in the car park

As discussed above there can be occasions when large quantities of weeds resulting from clearing an overgrown plot (often at the start of an allotment tenancy) such that they cannot be drowned, dried on a rack or hot composted using the equipment available for day to day use.  On such occasions a weed pile may be a useful option. This uses a technique similar  to that used when making a turf pile, to produce loam, but from a less encouraging start. It utilises  soil on the weeds most  of which could have been knocked off and kept on the plot

In the example shown wheelie bins filled with weeds were left in the allotment car park  by an unidentified  allotment plot-holder in October 2020. These were made into a mound which was covered with black plastic, to exclude the light, and left to decompose. After a year, the plastic was removed, and the pile covered with a double layer of ground cover material  to exclude light but to allow some water to penetrate.

Three months later the mound was checked and had reached the stage that the contents could be sieved to remove lumps and any remaining recognisable material such as wood. Very  few growing weed roots  had survived the process and these where easily remover by hand.

(https://www.theguardian.com/lifeandstyle/2014/mar/01/alys-fowler-perennial-weeds)  writing in the Guardian

The weeds are bagged using biodegradable bin bags and stored for two to three years.  The bags are covered with black plastic to exclude light and air and allowed to degrade. By the time the bags have degraded rich compost should be produced. One of the advantages of using biodegradable bags is that as the bags degraded worms gain access to the material assisting the composting process. Again the finished compost should be checked to ensure rots have not survived.

Garden Organic suggests a quicker method using plastic bags but it is only suitable for use during the summer when the lawns are mowed regularly. This involves mixing the weeds with fresh grass mowings in a plastic sack or bag e.g.  an old compost bag. The bag containing the weed/grass mixture is tied up and left in a sunny spot until the weeds are no longer recognisable. Some suggest the weeds will be sufficient decomposed to add to the compost bin but I would recommend leaving it a month or two. Take care when emptying the bags as the contents may best be described as slimy. 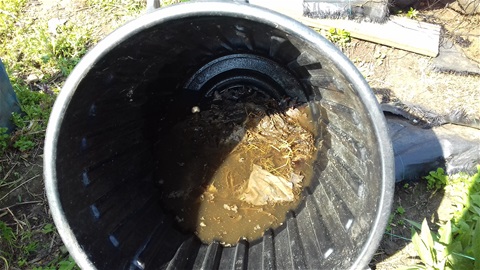 Drowning is one of the quickest ways of dealing with perennial weeds and it has the advantage of producing a compost activator that can be added to the compost bin or used as a liquid plant food.

The perennial weeds are put into a lidded bucket, old Bokashi bin or water butt depending on the quantity involved and weighed down with a brick or stone. The weeds are covered with water, the lid put in place to exclude light and the soup left for between four weeks and a year or more. The time will depend on the type of plant material. When all of the plant material has broken down.. The  contents of the bucket can be added to the compost bin (My favoured approach) or the liquid is then strained off to be used  diluted as a plant food (see  Plant Liquid Feeds) and the sludge  added to the compost bin.

This method requires a hot sunny summer to work most effectively.  Spread the perennial weeds, or their roots, on a dry flat surface such as a concrete paving slab in full sun or as we do put them in a rack.  To be on the safe side, if there are not too many of them,  I like to smash and flatten the roots with a club hammer to assist the drying process.  Once smashed they can be left on the concrete slab, moved to dry on a wooden cover on the top of the compost bin if a new Zealand or pallet bin is being used or dried on a rack made of discarded plastic bread crates (see photo).  After two or three weeks in hot sunny weather the roots will be sufficiently  baked to be  safely added to the compost bin. If damp or cool   the drying  time should be extended.

We have used a rack made of  bakers trays (illustrated)   for a number of years on our demonstration site. During the winter we are often presented with plants with roots attached and will dry them over the winter on the rack covered by a builders bag which keeps them dry and the area looking tidy