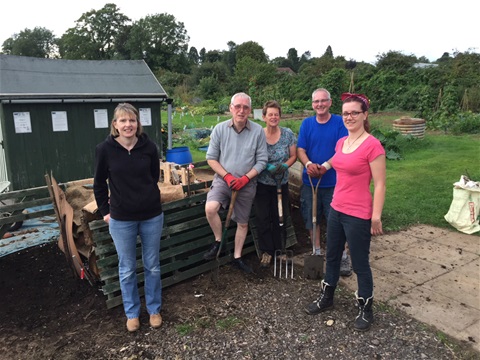 Hot composting is a well proven method designed to produce good quality compost - often in bulk but in a much shorter time period than the more common (cool) composting bin, bay or heap.  It is used by many organisations to process city green waste and by a growing number of community composting projects.

The incentive for the Stevens St trial was the need to process the large amounts of materials cleared from well over 100 individual plots - particularly things like perennial weeds, and woody waste which aren't suitable for normal cool composting on their own heaps plus material from the common areas - and stored in dump bags / piles.  Ideally, this mixed ‘waste’ would be graded, composted and used on site - avoiding the cost, labour and environmental impact of hiring skips or getting it trailered to the local Recycling Centre.

It was important that allotmenteers were involved and that any concerns about reintroducing ‘nasties’ like bindweed, mare’s tail and couch grass were addressed.

Basic research and discussions with other Master Composters suggested that Hot Composting would be worth trialling - the trick would be:

-  getting the size and design right (at least 1m3, in bays rather than an open heaps, wellmade with easy access and movable dividers to allow turning from one bay to another) - having the right mix (well chopped green/brown, evenly mixed with some accelerator eg soaked nettle tops or rotted manure, correct moisture, well aerated, balanced pH levels) - reducing heat loss (well insulated top and sides to keep at 40-60oC for at least 3-10 days, measured daily with a long probe thermometer)

-  turning regularly (when it starts to cool, at least weekly)

-  having enough extra feedstock to hand (eg 50kg/m3 to keep it active for two weeks) - maturing off (eg allow up to 12 weeks depending on outside temperature, test for any residual nasties before using)

Note: Hot composting  needs to exclude any cooked food, meat, fish, dairy or bread to avoid encouraging vermin / scavengers – unless using a sealed vessel.  Perennial weeds should not survive if the high temperatures are  maintained throughout the heap for at least three days.

The Compost bins and material

On August 5th and 6th, two heaps were created, with all the materials needed being gathered together in advance. The heaps were built up with layers of 'greens' (wet nitrogen rich material) and 'browns' (dry carbon rich material) - roughly 50:50 by volume plus a sprinkling of rainwater to ensure good moisture content:

The heaps created were about 1.25 x 1.25 x 1.25m, each having a volume of about 2m3, at either end of an existing pallet style area - this allowed easier turning into the empty bays.

Both heaps had their first turn on August 10th, and then subsequent turns on August 13th, 15th, 17th, 20th (Open Day), 22nd, 24th and 27th.  Several volunteers helped out at each of the turning sessions, which generally took about 30 minutes.  Fresh materials (mostly shredded paper, coffee grounds and grass clippings) were incorporated at each turn, plus a few cans of water and some nettle tops. Temperatures were monitored daily, with readings from the front and centre of each heap, and stayed largely within the 45 - 65oC range .

By the end of the second week, most of the original materials were not recognisable, though there were still quite a lot of twiggy bits. At the end of the third week, we felt that the heaps were sufficiently composted to need no further turning.

The heaps were left for a week to rest and samples of the product were taken to check for the propagation of any residual nasties (see the early photo below taken a few weeks after the trial).  Samples will continue to be monitored until the spring in test areas on Ruth and Judy’s plots. The volunteers were encouraged to barrow away their share of this rich, dark compost resulting from all their hard work! 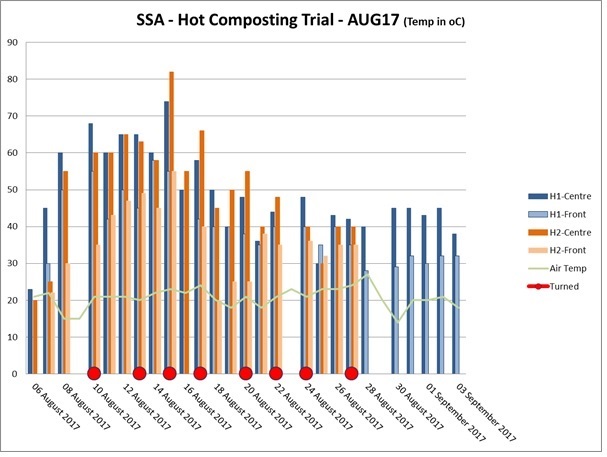 The raw compost was produced in just 3 weeks, and was perfectly usable as it was, as a mulch or soil improver.  It still contained twiggy material that was not fully composted, which could be removed – by hand or using a sieve to produce an even finer result. The left over material could then be added into their own cold compost heap.

Alternatively, volunteers could leave the compost for a few months to mature further – which, as there is virtually no worm activity in hot composting, would also allow some brandling / tiger worms to come along once the temperature had reduced.

The heaps stayed in the 45 – 65oC range for most of the 3 weeks - this meant that any weed seeds and roots, and any diseases or pathogens should have been destroyed. However, if they were concerned that they may be introducing 'nasties' into their plot, we recommended that they did some tests of their own before applying the compost. Filling a seed tray with compost, making sure it is well watered, and leaving it to see what pops up!

The volunteers were thanked for all their help over the 3 week trial period – we hope they found it educational and they gained the inspiration to carry on composting.

Materials they may need to do their own hot composting (e.g. cardboard, horse manure and coffee grounds) have been made available in the ever popular Stevens St ‘Swapsy Corner’.

Definitely - the trial was a great success in terms of allotmenteers involvement, skills transfer and technical learning.  The physical effort to turn up to 4m3 of material a total of 8 times, whilst gathering and adding new materials, was considerable but the community teamwork and sense of achievement were excellent.   We were able to produce the equivalent of around 50 x 40 litre bags (approx. £160 worth) of good quality compost in a short time from ‘waste’ and save the cost / effort of disposing of it responsibly off site.

Feedback from volunteers - on the last day of the trial, we asked the volunteers to complete a feedback form and 8 forms were completed:

What Next? - there will definitely be an ongoing need to deal with communal waste, and material from individual plots which are not suitable for cool composting.  However, we need to come up with a less labour intensive process, so we are looking at constructing a homemade (Dual) Tumbler Composting system.

Lookout for a further article to follow … maybe next year! 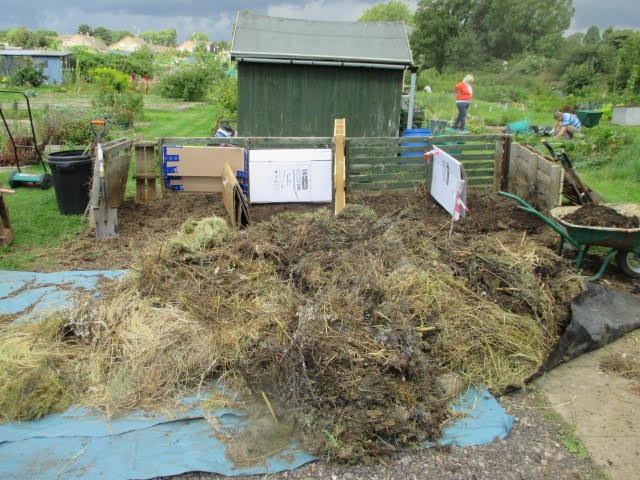 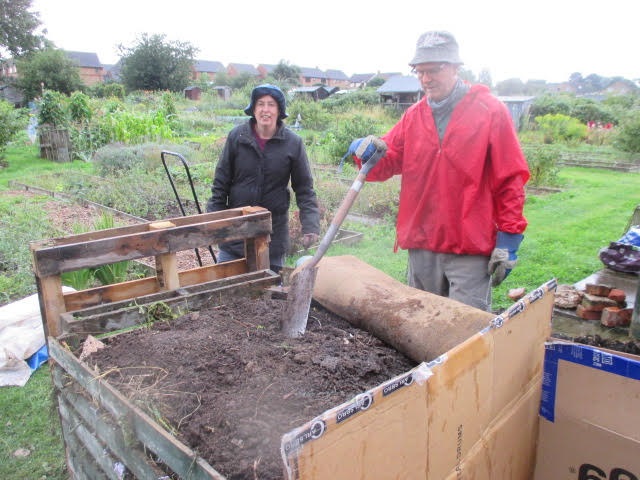 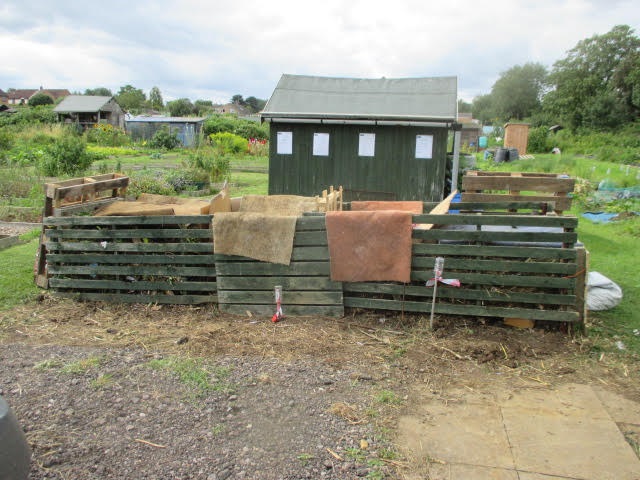 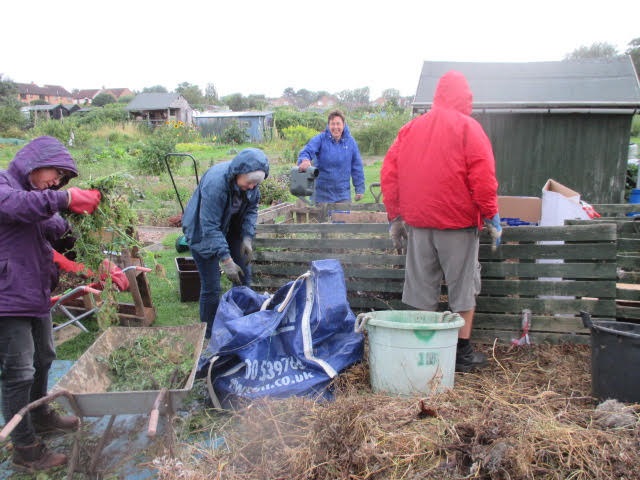 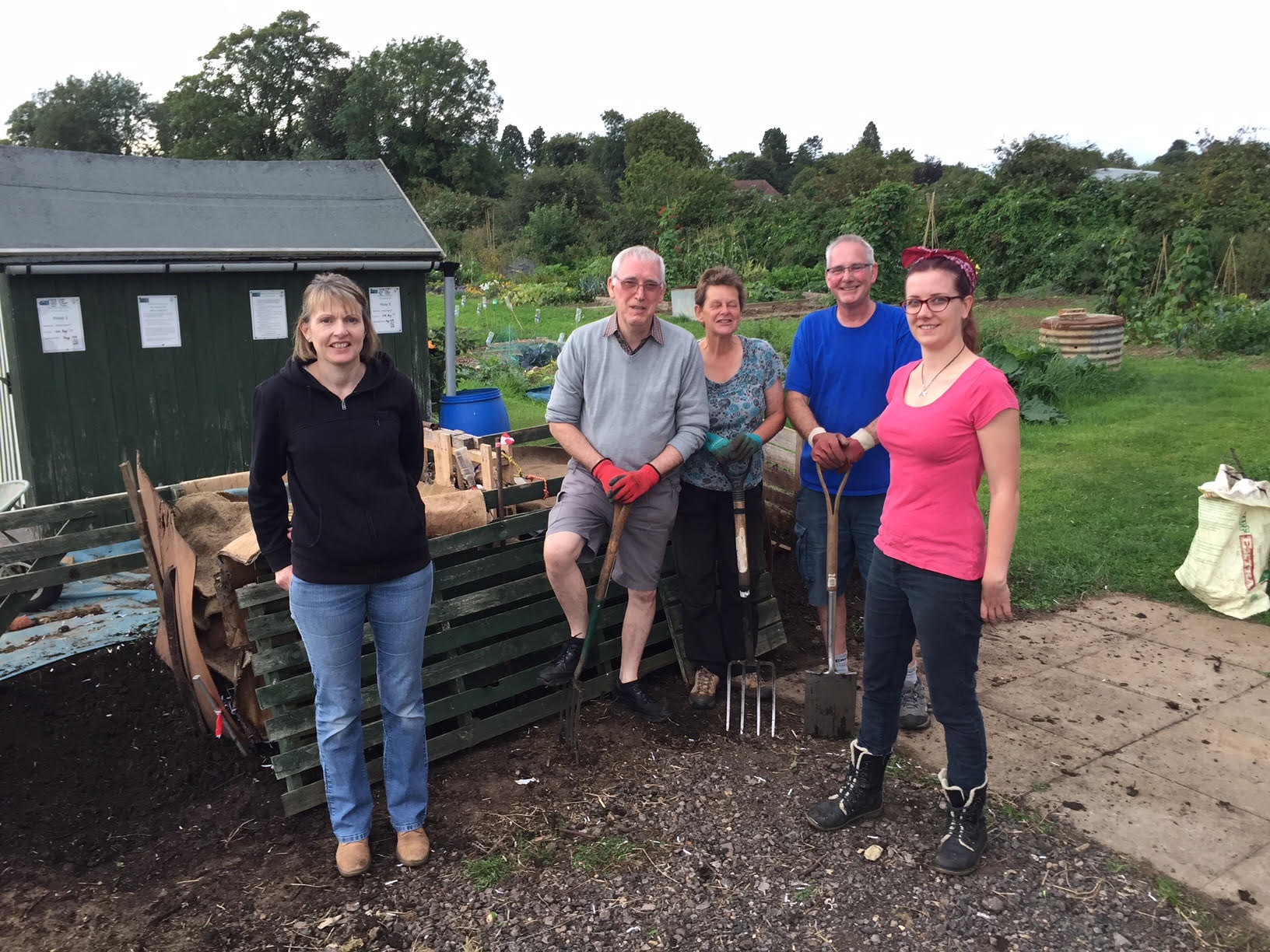 Bisley Community Composting Scheme opened in the Stroud District in November 2005.  It is a voluntarily run, members only scheme located on the Bisley Allotments.  It takes garden waste, 'hot composts' it and returns it as useable compost to members: 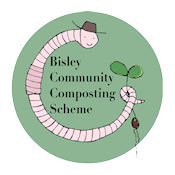 An excellent example of a community composting scheme on an allotment site is Bisley Community Composting Scheme. This is a  is a members only scheme, located on the Bisley Chestergate Allotments to take garden waste, 'hot compost' it and return it as useable compost to members.

The idea for community composting came from a meeting with allotment holders in 2004 and was developed by two committed allotments holders and the Allotment Warden. Village consultations supported by the Gloucestershire Wildlife Trust were held, and 35 households expressed interest and BCCS was launched in 2005. Stroud District Council provided a small ‘start-up’ grant. The scheme while based on the allotment is a separate Community Interest Company (CIC) with members paying a subscription of £25 a year.  Volunteers manage the scheme, with help from some paid local labour.

The scheme has approval for members to  bring their garden waste to the composting site. Once composted, the product is offered back to its members, and can be used “off-site” Compost is also offered to allotment holders.

This information and the photographs are taken, with permission,  from the website www.bisleycommunitycompostscheme.org.uk