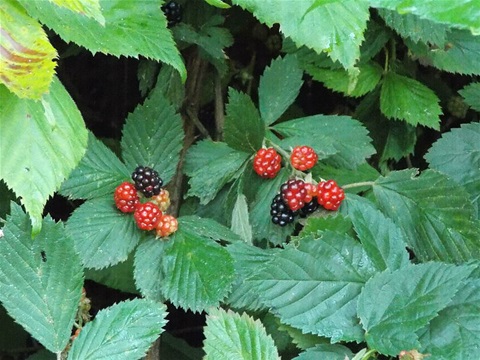 Blackberries enter the composting chain when we are clearing an overgrown site to make a garden or when pruning a plant grown for fruit. This may sometimes involve cutting unwanted leafy green canes or removing the year-old canes after fruiting. These shoots are cut down to the base presenting the composter with a  lengthy shoot which  it is better to prune after fruiting as if left until the next year these will die and become hard and brown making them more difficult to handle. Normally when removing these I would suggest cutting them into 2-3 foot lengths for ease of handling.

Bramble roots sprout from below the ground so when trying to remove bramble roots to clear ground  it is necessary  to pull up the crown, which may have fresh shoots growing from it, I personally would not cold compost this part of the plant preferring to  add it to the “council”  green waste bin. However it has been reported that the plant does not regrow from the compost once it has been shredded so it might be worth giving it a try.

Shredding the bramble avoids the scratches and effort involved in cutting it into short pieces. It will also speed the composting process and reduce the number of whole thorns in the bin. This is quite important as old thorns take a long time to compost and any remaining in the immature compost are bound to find your fingers.

There are two techniques used for shredding brambles. The first involves cutting them into easily handled lengths of about 2-3 ft that can be easily fed into the shredder. The second technique, which I have not tried, involves feeding   the whole length of the bramble into the shredder root end first. The self-feed action should pull the whole length of bramble through the cutter.

A traditional alternative to composting blackberry and other prickly pruning’s such as rose, gooseberry stems is to use them to make a Dead Hedge. This can also be used on other plants such as Clematis and ivy, which are difficult to shred for composting. Dead hedges have been used for centuries  to contain farm livestock and windbreaks and in 1791 a 3 ½ feet high dead hedge costed  by Arthur Young at 1/2d a yard  in a Month's Tour to Northhamptonshire, Leicestershire etc in 1791 http://www.visionofbritain.org.uk/text/chap_page.jsp?t_id=Young&c_id=5

A Dead Hedge makes a good haven for wildlife such hedgehogs, beetles, toads and birds such as the wren while the material slowly decomposes. And a rustic screen to hide part of the garden. The technique involves driving one of two-metre long stakes into the ground at 60cm apart in two parallel rows about 45cm apart in lines to form the side supports of the hedge. Hazel or willow can be woven between the supports to contain the brambles, clematis or other material such as waste branches and even saplings from thinning or clear woodland being used to construct the hedge. Some organisations now use dead hedges as a means of controlling routes taken by visitors. In the garden the dead hedge habit can be renewed each time brambles or clematis etc are cut back.